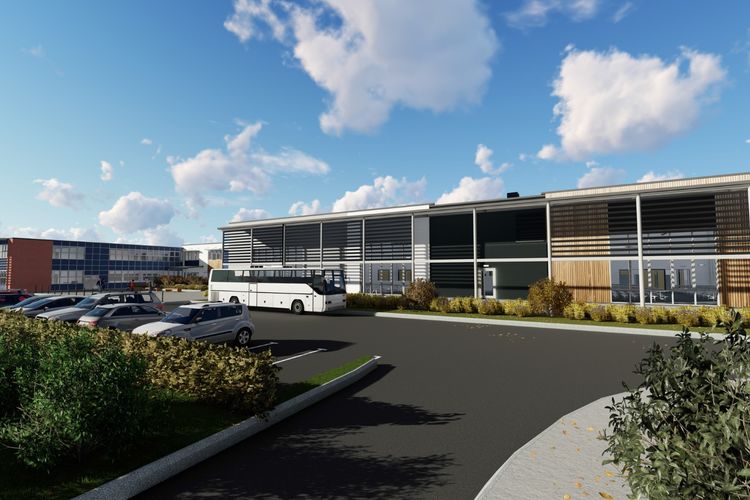 Wednesday 15 May 2019 marked a special day for the teachers and pupils of The Academy, Selsey, as they celebrated the official opening of the new school.

The formal event was attended by over 100 people and Dr Karen Roberts, CEO of The Kemnal Academies Trust led the thanks and acknowledgements to all those who had played their part in the three year rebuild project. The Academy Selsey suffered a devasting fire in August 2016 which destroyed 80% of the school’s buildings.

During the immediate aftermath of the fire, and the school’s reconstruction, all lessons were delivered in temporary accommodation. Initially the school was housed in Selsey Town Hall, Bunn Leisure and at Chichester High School before a temporary village was established on its grounds in October 2016.

Staff and students now benefit from a bespoke new building, and can enjoy state-of-the-art classrooms, library and Information Technology spaces which provide the best possible learning environment for the children.

The buildings, which can cater for up to 750 pupils, are super energy efficient and boast a range of new spaces including purpose-built classrooms for practical subjects such as science and food technology, a hall with retractable seating and fully integrated light and sound as well as an expressive arts wing. Other features include a library garden and an outstanding art studio.

At the opening event, Mr Tom Garfield, Headteacher at The Academy Selsey, noted the resilience, dedication and professionalism of the school’s staff and the overwhelming support of the wider community. He said:

“These incredible buildings now provide the facilities and educational environment that our staff and students deserve – facilities that will set the tone for education on the peninsula for years to come.”

“On behalf of the Trust I would like to congratulate all who have been involved in the very successful rebuild of the Academy Selsey.  It has been a tremendous effort.  Our decision to continue to provide Secondary education in Selsey has been vindicated with a high-quality building that will engender great pride and be at the heart of its community.”

Ridge and Partners LLP (Ridge), were responsible for the architecture, engineering and project management over the course of the project.

Lara Denison, Partner at Ridge, said: “Ridge was delighted to support the team at The Kemnal Academies Trust to re-design and project manage the construction of the school which we hope children and teachers alike will love for many years to come!”

The Academy Selsey was recently awarded a Good rating from Ofsted, following an inspection in May 2019, just days after moving into its new buildings. The report noted how the school had been ‘impressively steered’ during the period of its rebuild and reconstruction. It also mentioned the strength of the relationships between staff and pupils and the good progress that students make in a wide range of subjects.

Also In the News

Back to top
*
Cookie Notice: We use cookies on this site to improve your user experience.
Accept Find out more